U.S. residents don't need to suffer from microsystin-contaminated drinking water...There is a SOLUTION and it's AFFORDABLE! 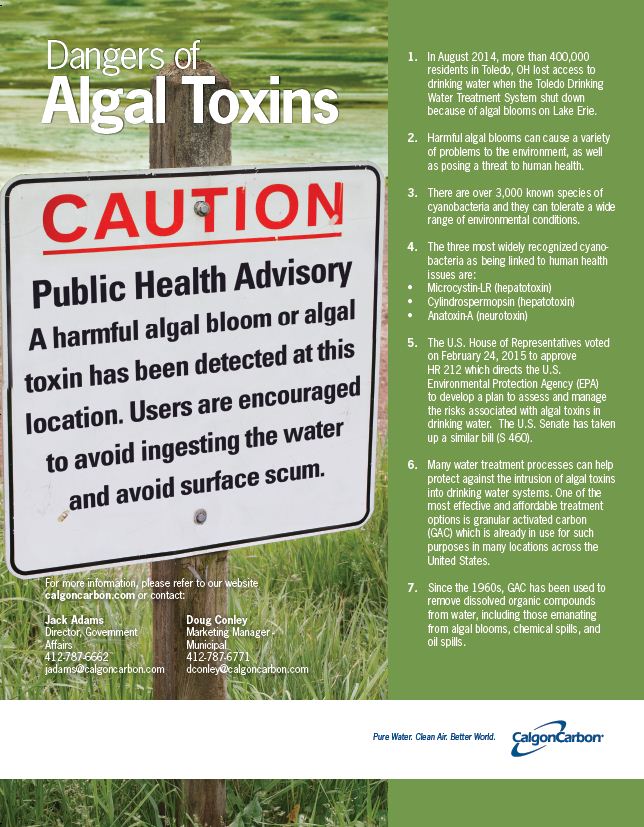 Granular activated carbon (GAC) is one of the most effective and affordable drinking water treatment processes to protect against the intrusion of algal toxins into the drinking water system.

Not only does a community suffer major inconvenience when a drinking water treatment plant shuts down, it also experiences major economic damage as retail stores, malls, restaurants, schools, public facilities, and many other businesses are forced to close.

The use of GAC for the treatment of drinking water is a well-established practice among municipal water utilities in the United States. Since the 1960s, GAC has been used to remove dissolved organic compounds from water, including those emanating from algal blooms, chemical spills, and oil spills. GAC has also proven effective in removing microcystins and anatoxins as well as Cylindrotoxins and saxitoxins.

The ability of GAC to protect against algal toxins while simultaneously addressing other critical challenges, such as carcinogenic disinfection by-products, volatile organic compounds, endocrine disrupting compounds and many others, makes the treatment a uniquely effective and affordable solution for municipal water providers.

Do you want to play a role in the prevention of contaminated drinking water?